Are you looking for something special?

Have A Personal Question? Want A Private Reading? Need A Subversively Stitched Sampler?
E-mail UrthaLun at Comcast.net
Include the word READING or COMMISSION in your "subject" line.

Words To Live And Stitch By

Bide within the Law you must, in perfect Love and perfect Trust.
Live you must and let to live, fairly take and fairly give.

For tread the Circle thrice about to keep unwelcome spirits out.
To bind the spell well every time, let the spell be said in rhyme.

Light of eye and soft of touch, speak you little, listen much.
Honor the Old Ones in deed and name,
let love and light be our guides again.

Deosil go by the waxing moon, chanting out the joyful tune.
Widdershins go when the moon doth wane,
and the werewolf howls by the dread wolfsbane.

When the Lady's moon is new, kiss the hand to Her times two.
When the moon rides at Her peak then your heart's desire seek.

Heed the North winds mighty gale, lock the door and trim the sail.
When the Wind blows from the East, expect the new and set the feast.

Nine woods in the Cauldron go, burn them fast and burn them slow.
Birch in the fire goes to represent what the Lady knows.

Oak in the forest towers with might, in the fire it brings the God's
insight. Rowan is a tree of power causing life and magick to flower.

Willows at the waterside stand ready to help us to the Summerland.
Hawthorn is burned to purify and to draw faerie to your eye.

Hazel-the tree of wisdom and learning adds its strength to the bright fire burning.
White are the flowers of Apple tree that brings us fruits of fertility.

Grapes grow upon the vine giving us both joy and wine.
Fir does mark the evergreen to represent immortality seen.

Elder is the Lady's tree burn it not or cursed you'll be.
Four times the Major Sabbats mark in the light and in the dark.

As the old year starts to wane the new begins, it's now Samhain.
When the time for Imbolc shows watch for flowers through the snows.

When the wheel begins to turn soon the Beltane fires will burn.
As the wheel turns to Lamas night power is brought to magick rite.

Four times the Minor Sabbats fall use the Sun to mark them all.
When the wheel has turned to Yule light the log the Horned One rules.

In the spring, when night equals day time for Ostara to come our way.
When the Sun has reached it's height time for Oak and Holly to fight.

Harvesting comes to one and all when the Autumn Equinox does fall.
Heed the flower, bush, and tree by the Lady blessed you'll be.

Where the rippling waters go cast a stone, the truth you'll know.
When you have and hold a need, harken not to others greed.

With a fool no season spend or be counted as his friend.
Merry Meet and Merry Part bright the cheeks and warm the heart.

Mind the Three-fold Laws you should three times bad and three times good.
When misfortune is enow wear the star upon your brow.

Be true in love this you must do unless your love is false to you.

These Eight words the Rede fulfill:

"An Ye Harm None, Do What Ye Will"

Skip to content
Press Enter / Return to begin your search.

First, let me just thank everyone for playing along yesterday, that was outstanding, and I love how we are all so diverse, love it.

I do this as much for myself as for you guys, so here goes with today’s announcements.  Remember how I said that I write shit down on any- and everything I can find?  Well here is a nice example, it’s also an example of how my blog, and blog-hopping, has taken over my life (right, OCD much?  I know I know). 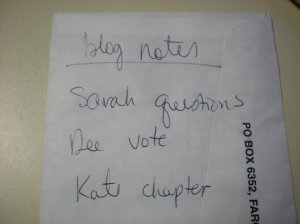 So this is what the note means:

Sarah (Sure Thing) has a post up that she’d like some feed-back on, so go there and give her your opinions.

Delia had a vote on her blog but I think we missed it, you should go check, maybe give her your thoughts anyway.

Kate recently posted the start of her new novel, which is very fun, and she’d like a bit of feed-back as well.

And over there, cast your eyes to the right, we have still more additions to the Important Things blog roll.  Why yes, it is now officially cumbersome and tilting my entire site off its foundation.  Worry not though, My Hurricane will be in town next week, and all will be well.  In fact, this is one of my other announcements, an up-grade is in the works.  You already know how I feel about change, so I am preparing my wee self elf for the new look.  It’s coming, whether I like it or not.  (If you would like to be included in this listing, and/or the new one later, let me know.)

I will begin this next portion of tonight’s events with a disclaimer, I was young when I first gave birth, and I believed what people told me.  I wanted to name my son (after TEN months of being pregnant, no I am not joking) a name that wasn’t actually a name: J.D.  But the official woman in the hospital, who was older, and stood more firmly than I did, said that was illegal, I now know it was not.  She said the initials had to stand for something.  She was wrong, I could have done it my way, but I was in pain, had a huge and fresh surgery scar, and I had an equally huge baby to deal with, and I just wanted to go home and start being a mom.  So I assigned some words to the initials, and then never looked back.  Never called him anything but J.D.  (okay, that’s not true, I call him Jade, and I call him Petunia, and for a long while there, before he had sisters, and sometimes to this very day, we call him J.D. Boy).   There’s a reason I tell you all this.

He won the Academic Award today for his entire graduating patrol class.  (As he told me last night,” that’s right, the guy who never studied got the highest test scores.”)

If any of you can read that plaque, do not, I repeat, DO NOT say it out loud, or anywhere near me.  I will not acknowledge it.  (His middle name is Daniel, that doesn’t bother me as much, for obvious reasons.)  I am HUGELY proud of this kid.  All those months of toting him around (in the womb and years beyond that) were totally worth it.  And because he was the perfect baby, he has sisters, who I am also HUGELY proud of.

And guess what else?  Fictional Friend Whitney (last discussed here on the Pictures of State Fair Day post) is really a person.  And a lovely person too!

For our card draw, we have returned to Colette’s Hidden Realm.  And before anyone says anything, yeah, he’s a bit odd, but let’s concentrate on the message today, shall we?

The Ringmaster of Scrutiny is all about the details.  Look closely and pay attention to the smallest elements of what is being presented to you on your path.  It is in these details, not the broad strokes, that you will find the breathtaking beauty  and perfection in what you observe.

This Ally is on your side to point to the deeper meanings of what unfolds in your life, and reminds you that every moment counts.  Staying present in this perfect moment, observing the minute things, leads you to manifest your highest good and greatest desires.  Grand gestures are for other times.  It is the smallest acts that really count now.”

I channel messages from the Universe, have done for decades, was born this way. I am a mom, a wife, a daughter, an aunt, a cousin, a niece, a Tarot card reader, a neighbor, an educator, and (finally) someone's Nana. View all posts by lunarmom